The Life we Choose 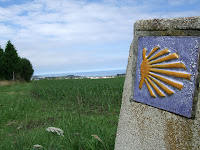 Viewing the movie The Way again reminded me that there are some movies that you have to see multiple times to begin to get what they have to offer.  Since this is one that gets better the more times you see it I won’t be spoiling it for anyone who hasn’t yet made their own Camino.

Early in the movie we see a flashback that sets up one of the central themes of the movie.  Tom has learned that his 40 year old son, Daniel, has been killed in a tragic accident during a storm in the Pyrenees.  As his train approaches the village in which he will identify and claim the body, he remembers his last conversation with his estranged son.  Tom and Daniel have argued over the path each has taken in life and Tom defends his experience saying, “This is the life I have chosen.”   Daniel responds sadly, “A life isn’t something you choose, Dad, it is something you live.”

We don’t get enough detail in the conversation to know just what Daniel means by that comment, but the contrast in their lives is clear.  Tom is settled into a profession and is tired.  He doesn’t even want to walk the short distance to the golf ball to take his next shot but his ophthalmology patients are scheduled a month in advance.  Daniel is going to hike 500 miles across Spain and has no idea what he will do after that.

So the death of his only son at a time when he is confused about himself and still mourning the death of his wife tips the balance and Tom decides to walk the Camino with the ashes of Daniel.  Along the way he meets other pilgrims and they tag along with him.  When he finally softens toward them he gets into a conversation with “Jack from Ireland” whom Tom has identified is much like Daniel.  But Jack justifies his life as a travel writer who still hasn’t started on the novel he dreams of writing by saying, “This is the life I have chosen.”  Unlike Daniel, Jack sees a life as something you choose.

I had a conversation many years ago with a colleague who challenged me to be more ambitious.  His critical feedback was that I wasn’t clarifying what I wanted in life and going after it.  I remember noting to myself—more than to him, he wasn’t asking me about my philosophy—that it was my sense that most of the really amazing things that had happened in my life arose in a manner that seemed random or even capricious.  I was afraid that if I tried to be too focused on creating a specific outcome I would plan out the serendipity.  Still I took his counsel to heart at least enough to become more self-critical.  It doesn’t seem that one can have a life well lived if one only accepts whatever arises.

I am tempted to suggest that we may need to find a balance between “choosing” and “living” but that seems too passive a stance.  A more active framework is one I first learned in the writings of George Leonard.  He urges us to engage in focused surrender.  Pay keen attention and put all your effort into it and then… let go.

At the School for Living this week we will be exploring the phenomenon of anxiety.  This feeling arises when something is out of balance in our lives.  It can be a call to action if we hear it correctly.
Posted by Mark Lee Robinson at 6:10 AM

...is deeply committed to your own growth and development? Do you consider self-actualization not just an option but a necessity?
...finds a deeper sense of your own identity in the community of which you are a part? Do you know that your own transformation is supported and prompted by surrounding yourself with others who share your commitments while they challenge your perspectives?
...cares about your impact on the world and wants to work for greater harmony and justice? Do you feel deep compassion for the suffering of others?
...knows yourself to be an expression of the energy and the intelligence that creates all that is? Do you long for a deeper awareness of and connection to the Divine Presence?
Then come help us prepare the Sacred Soup!

Sign Up Now
For Email Newsletters you can trust.